The world "show" fails to capture the grandeur, spectacle, and sheer decadence that is Baselworld 2014. But for convenience sake, I will simply refer to this short hand version for my report.

This is my fourth full day at the "show," and I finally feel acclimated enough to give some impressions. First of all there is the sheer scale of this show in terms of physical size. Building 1 (the main exhibit hall) has three stories, with each story requiring ascent by two escalator flights. Each floor is like walking a shopping district in any major city, except each store is a watch or jewelry (or combination) establishment.

Except they aren't really "stores," but rather exhibit pavilions, but unlike any other I've seen. For all practical purposes, they resemble and serve as facilities to house their goods, and keep their staff and visitors comfortable and feeling like they are a brick-and-mortar facility, but they are built in modular fashion in such a way that they can be set up and disassembled in a few days. They are not only functional, but are works of art in themselves designed to dazzle the public and outdo the competition, and attract attention ("Come see what's going on over here."). But at the same time, not be gaudy or garish. Where that line is crossed I am not exactly sure, but as a final test, a pavilion's design must pass final approval by an exhibition committee for being "tasteful" and built to proper scale (they must be two stories tall, for example) and safety code. Take the Hermes pavilion, for example:

A building wrapped in an exoskeleton of wooden slats. An attention grabber for sure, but beyond that I defer to your judgment. One my favorites was the Bulgari pavilion. Not a fan of the brand myself, but was impressed with the Disney Music Hall-inspired design: 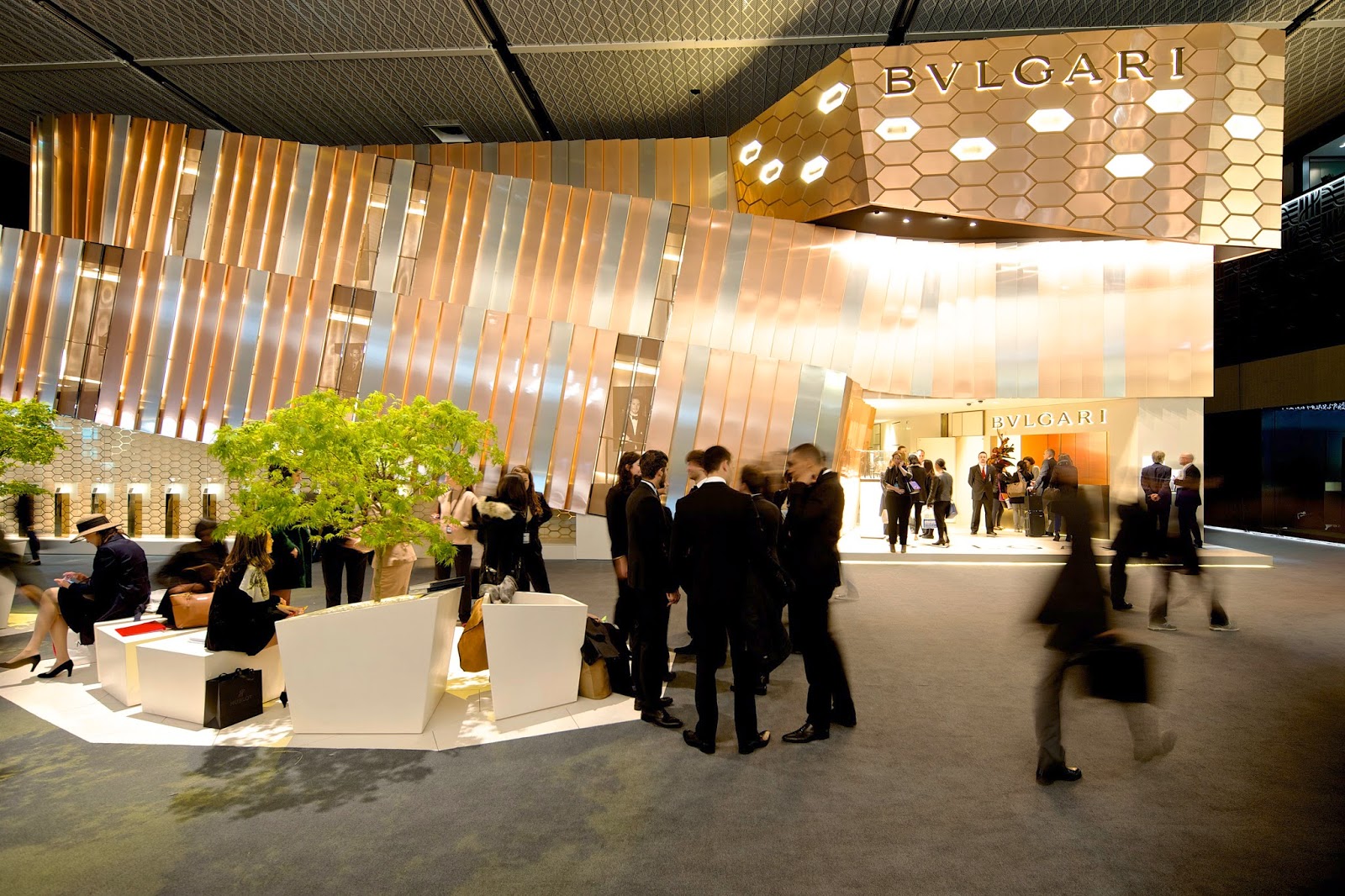 Or maybe the sides are a representation of a watchband, who's to say. But these buildings are designed and built in great secrecy, and at a cost that I'm sure is into the millions of dollars. The exhibitor entry fee into the Main Exhibit Hall, street level, I'm told is $5 million, and then the exhibitor must build his pavilion in addition to that. The exterior walls of some pavilions are giant video screens, requiring an entire room inside the pavilion for computers and servers to keep the giant media presentation operational. Other pavilions, meanwhile, have restaurants with professional chefs to feed their staff and VIP guests.

I can't help but be in a certain awe of all this high tech, style, and ingenuity. Yet the average show-goer seems fairly blasé about the whole thing, striding down the walkways of the exhibit hall as though it were an everyday occurrence.

Then there is the whole central plaza, or "Messeplatz," which cuts through the main exhibit hall at street level and serves as the tram stop to deliver  showgoers to and from the train stations and various other destinations throughout Basel. Beginning in 2013, it was covered, with a giant "doughnut hole" built into the middle, which serves as a skylight. 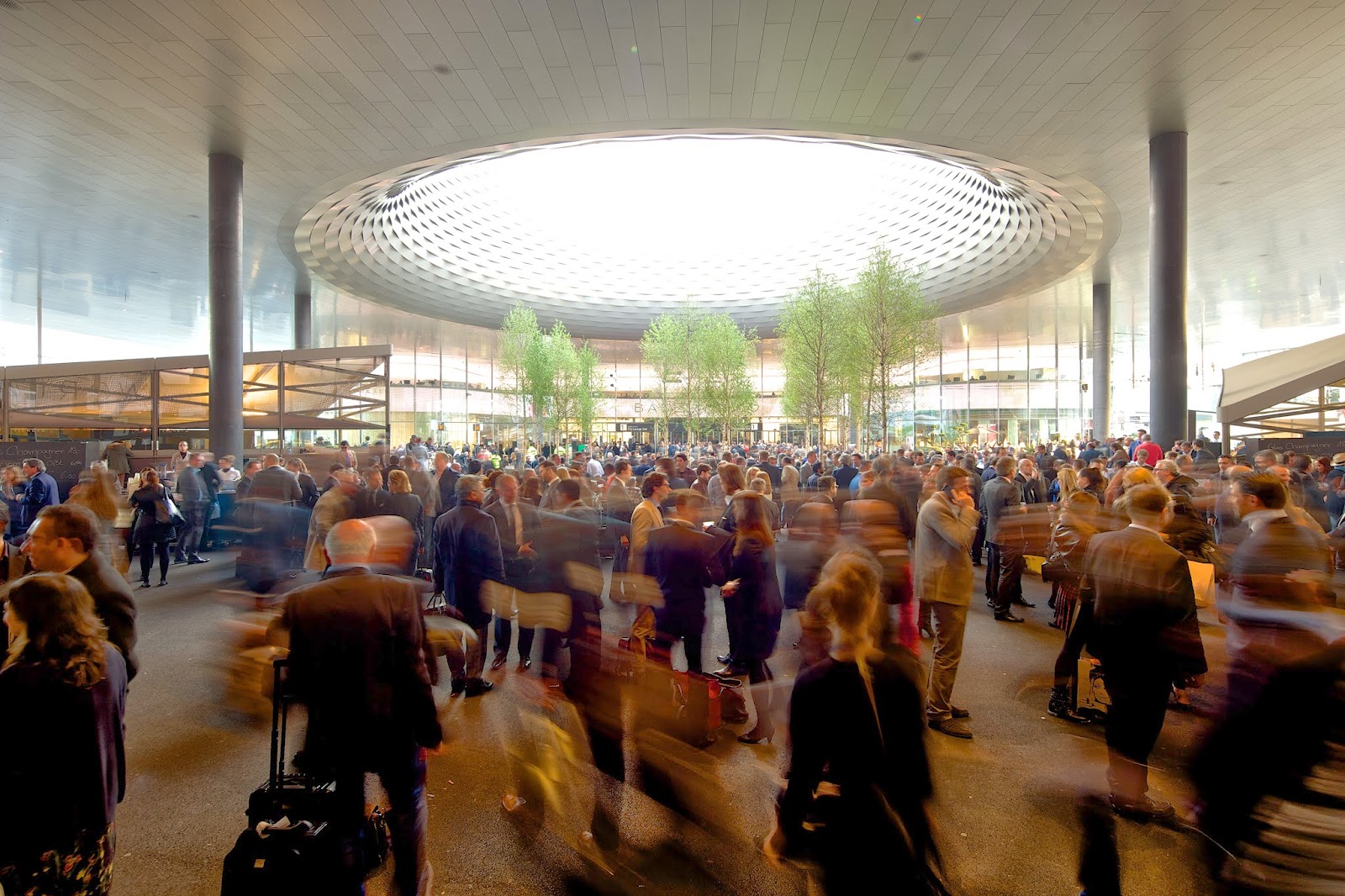 Unveiled at the show in 2013, it cost $365 million (comprising the largest chunk of a $500 million makeover of Hall 1). It was prebuilt in modules, and installed in less than 12 months after the closing of the 2012 show. The space above the new ceiling of the Messeplatz, on floors two and three, are now additional exhibition space.

Here are some more numbers and initial impressions of the show:

* An estimated 100,000 people will attend the show;
* There are approximately 4,000 journalists here from all over the world, from well known publications to obscure "I just made it up last week" blogs and Facebook pages. I would go so far as to say that print publications devoted to watches are on their way out. Virtual magazines are where the action is;
* 22 billion Swiss francs of watches were exported from Switzerland in 2013, making watches the backbone of the Swiss economy, even ahead of tourism and chocolate (but not banking, which the industry does not reveal, though I suspect is in excess of 22 billion!);
* Rooms at the Ramada Hotel, immediately adjacent to the fairgrounds, start at 640 Swiss francs (about $755 US) per night, and go up from there, and they are sold out. By comparison, my room at the InterCity Hotel in Freiburg, Germany is $148 per night, plus $58 daily round trip for the train ride to and from Basel.
* The mayor of Basel, attending opening ceremonies, declared Baselworld the city's most important (read $$$-producing) event; and
* the new buzzword this year is "Swissness," both a noun and adjective to designate a singular origin of a watch to Switzerland. The Swiss watch industry successfully petitioned the Swiss parliament to trademark the word, which will give the industry group the right to sue any non-Swiss company that might try to use the word.

Finally, here is a photo of yours truly, a rare moment in a business suit, and holding my all-important media badge which gives access to the "media center," an oasis that affords me wi-fi access (where I am composing this entry now), bathrooms, snacks, and a multitude of caffeine-infused beverages. 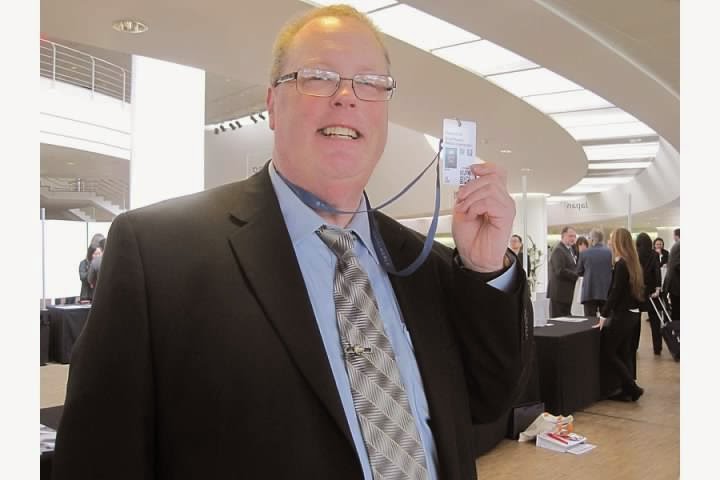 That's it for this installment. More to come, including brand impressions.