In addition to watches, I enjoy collecting vintage watch catalogs. Not the parts and service catalogs and bulletins, for these are fairly easy to find. I'm talking about the catalogs that companies sent to jewelers annually so they could see the new models. These are much more difficult to find, since jewelers typically threw them out every year when the new catalogs arrived, while watchmakers tended to save the technical catalogs/bulletins.

The jewelers' catalogs are getting harder and harder to find. Up until a few years back, I would find one a month. Now, I'm lucky to find one a year, as collectors are gobbling them up and paying big money for them. I remember a few years back, someone on eBay was liquidating a bunch of old Zodiac watch catalogs. I was bidding in the $100 to $150 range, and continually being outbid by one increment. The next catalog was a really nice one, so I put in a proxy bid of $1,000 on it, just to be sure I'd get it. Guess what? The catalog went for $1,010! I'm pretty sure I know who was buying all these catalogs, and I must admit to a little devilish pleasure in knowing I made the guy reach that high for it!

That's certainly an extreme example, but shows how fanatical some collectors are. As another example, I recently sold a mid-1960s Heuer (pre Tag) catalog to a collector for $400. It's not unusual to see these catalogs go in the hundreds of dollars, especially if the catalogs contain nice, high resolution images.

It's no surprise as to why this phenomenon is occurring. These old catalogs are invaluable sources of information to collectors and historians like myself. You can glean tons of great information about a given watch, such as case and dial options that were offered; what type of attachment (band or bracelet) came with the watch; what was the model name and/or number assigned to the watch; and the original retail price.

At the same time as good vintage catalogs are disappearing, the amount of "junk" being passed off as "vintage" increases. Ebay sellers, for example, are trying to sell 2- and 3-year-old catalogs (handed out at trade shows by the truckload) as "vintage."

But the search continues, because every once in a while I find a diamond in the pile of crap. A recent example is a beautiful 1948 catalog from Wakmann. It was an especially nice find because Wakmann at the time was the sole USA distributor for Breitling chronographs and Election watches. Many of these are illustrated in the catalog, and since the seller neglected to mention this or show any images, I got the catalog for a song ... $20.

I wrote about Wakmann watches back in 2003 for my newsletter, Wristwatch News, to emphasize that while Wakmann's triple date/triple register chronograph is easily the company's most identifiable watch, they made many other watches as well. This 1948 catalog bears this out. There are many nice dress watches, both in solid gold and gold filled:

And take a look at these "his-and-her's" dress models:


Of course, the creme de la creme of this catalog, at least for me, is the Breitling chronographs. It's unlikely that these could be found in the "budget" price range to which this blog is dedicated, so it's fun to at least look at pictures and see what these watches were originally priced at! 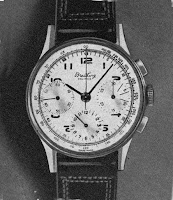 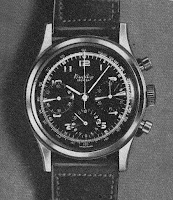 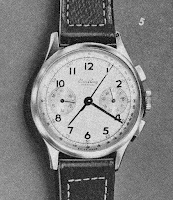 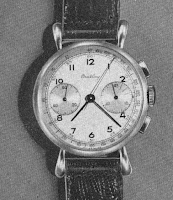 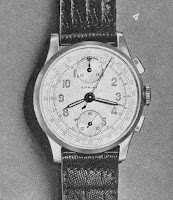 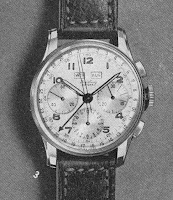 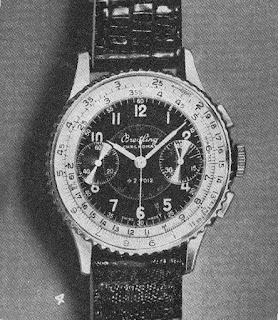 The Chronomat (above) was the prototype for the Navitimer which was arguably Breitling's most famous watch. In stainless steel, the watch retailed at $89.50. The 18kt gold version retailed at $209.00.
How Wakmann finagled distribution rights for Breitling (which lasted into the 1970s) is a little easier to understand when you realize that Breitling was a virtually unknown brand in the United States in the late 1940s and early '50s. Still, the distribution agreement was a coup for both Wakmann and Breitling. When the Navitimer came out in 1952, it was named the "official watch" of the Aircraft Owners and Pilots Association, which suddenly put Breitling on the map and made Icko Wakmann a force within the Swiss watch industry. Which is unusual for two reasons: He was born in Russia, not Switzerland; and the company never made any of its own movements, but imported Swiss ebauches (rough movements) from Switzerland and merely performed the finishing/casing/dialing in house, either in New York or their Swiss facility in Solothurn.  Speaking of dials, many of the company's chronographs can be found co-branded (Breitling/Wakmann). Others can be found co-signed "Wakmann/Gigandet." Charles Gigandet was a co-founder along with Wakmann of the company in 1925 before Wakmann arrived in New York and established Wakmann USA in 1947.
While other companies disappeared during the quartz crisis of the 1970s, Wakmann continued on. Their "triple/triple" continued to be a big seller for for fans of mechanical watches. They also sold and serviced mechanical clocks for aircraft, which had been manufactured almost since the beginning in the '20s. Many are still in service today today in vintage aircraft.
Wakmann himself died in April of 1981 at age 86. His final venture was the Relide Clock Co. (which also produced some wristwatches). He presided over the company until 1979 when at age 84 he finally retired. He was in the watch/clock business for 54 years.
As late as 2003 when I wrote the Wakmann story for the newsletter, the New York office was still operating with one employee. Today, that office is closed, with only offices in Switzerland still operating. The company still sells wristwatches, direct to consumers, via its website (shop.wakmann.ch) and services aircraft clocks. The watches are now all quartz.
Thanks for reading. Also, the Atlantic "stop chronograph" featured in the last blog entry is now for sale on my website for $150 if anyone is interested. Click on the link below to view it:
Atlantic Stop Chronograph
Also, if you haven't order a copy of Hamilton Wristwatches: A Reference Guide, now would be a good time. I have a fresh batch of copies, ready to mail. Click on the link below to order.
Hamilton Book
Happy watch hunting!
Bruce Shawkey