I've long maintained that there a TON of watches out there that are unusual, interesting, even rare, that don't cost a lot of money. You don't have to break into the 401(K) fund to have some fun in this hobby. 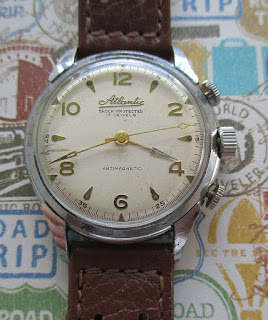 It sort of looks like a chronograph, but without the registers. The top and bottom buttons merely freeze the sweep second hand (top button) and reset the sweep second back to zero (bottom button) whereupon it resumes its sweep as a normal second hand. The freezing of the second hand is a little different from a "hack" feature found on some sport and military watches in that it does not stop the whole movement. In other words, the watch keeps on keeping time, even when the top button is depressed. In this way, the watch does not lose time when the stop feature is being utilized.


Atlantic watches have quite a history, going back to 1888 when Eduard Kummer (born March 26, 1845), established the EKB (short for Eduard Kummer Bettlach) company in Bettlach, near Grenchen, Switzerland. That original name stuck until 1952, so adverts up to that time are seen with the name "Ed. Kummer." Ads after that depict the "Atlantic" name, and sometimes Ed. Kummer, and sometimes the name "Aristex" which was another brand name the company came up with. (Ariston and Opus were two other brands of the company as well.) 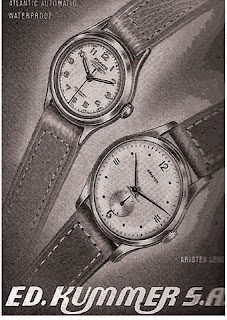 Like many watch companies, Atlantic flourished in the years immediately following World War II, when the floodgates opened due to pent up demand for consumer goods during the war. Atlantic came out with many model names, but perhaps their most famous was the "Worldmaster." Also like many watch companies, Atlantic began to disappear in the '60s with the market gravitating toward cheap, disposable watches. The '70s delivered the final blow with the introduction of quartz watches. In 1989, a company called Uhren Verkaufs Büro (UVB) acquired distribution rights to the brand. That company went bankrupt in the early 1990s, and now the Atlantic company distributes its own watches, currently focusing on the Eastern-European markets. "Worldmaster" in the main model it promotes. Here's one from its current lineup, an homage to their original Worldmaster from the '50s: 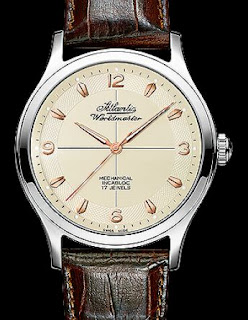 All of their vintage wristwatches utilized ebauches (rough movements) from other suppliers such as ETA, Fountainmelon, A. Schild, and others. This was a very common practice in its day, since the Swiss watch industry had by this time divided itself into specialty companies. One group of companies made the vast majority of raw movements and sold them to watch companies where they would be "finished" in house, including polishing/plating of the plates, adding a custom part or two, or perhaps an in-house "module" of some kind, etc. Other Swiss companies made cases, while others made dials and hands, and so forth. That is why so many watches from supposedly competing companies from those days bear a remarkable resemblance to one another! (The practice continues to this day; many watch companies buy their movements and cases from the same handful of suppliers.) 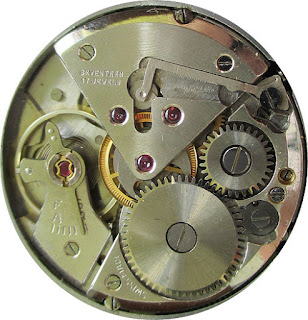 The direct sweep second is continuously running, and is coupled to the fourth wheel with a latching axial clutch. The pusher at the 2:00 position stops the second hand as long as held down. The pusher at 4:00 resets the second to zero, and restarts it when released. Several companies used this movement, including Breitling, and promoted the watch to physicians, time/motion study scientists, technicians, photography darkroom enthusiasts, etc., just about anyone needing a watch to measure short bursts of elapsed time, while maintaining constant time like a "normal" wristwatch. Perhaps most famously, the Omega Watch Co. utilized this concept on their "Chronostop" model, although their movement is based on a Lemania ebauche.


It's labeled "Wall" watch company, but the movement is the same as inside the Atlantic.

In any event, it appears that Atlantic did not have great success with this model, due to its limited timing ability. I'm not even aware that Atlantic gave it a specific model name.

The specimen I have measures 42mm long lug to lug, by 35mm wide, not including any of the crowns. The case composition is chrome plating over base metal for the bezel, with a stainless steel snap back. The bezel shows this was well used (but not abused) by its original owner. Pitting is evident, but not severe. The dial is original and still in very good condition. The hollowed-out arrow hour and minute hands add a nice note of eccentricity to the piece. The watch came to me with an ill-fitting winding crown, and one of the pusher crowns was missing. In restoring this watch, I had to use a hodgepodge of crowns due to weird tap sizes on the stems. Not the most pretty, but everything works as it should. The watch kept acceptable time when I received it, so I did not bother to have it cleaned/oiled/adjusted. (If it ain't broke, why fix it?) 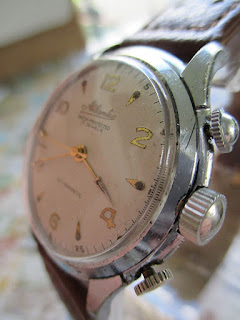 I hate to reveal the exact price I paid for it, but let's just say it was under a hundred bucks. I want to play with the watch for a while, but eventually it will be for sale on my website!

The current Atlantic (this the link to the company website)


Thanks for reading, and I hope you encounter some unusual "finds" in your travels as well!