I know that many watch collectors (including this one) don't have the time to scour garage sales, flea markets, thrift stores, and the like for vintage watches. It's one thing if you have a variety of interests and knowledge of a variety of collectibles categories. I know a fellow, for instance, who is interested in knives, coins, lighters, fountain pens, model trains, and banks. For him, a day spent pounding the pavement, "shaking the bushes" as it were, might yield any number of treasures. But for those of us dedicated to watches, it's much easier to cultivate relationships with a "picker" or two, people who have seemingly unlimited time, who live for the hunt, and usually prefer to do their business in cash, if you know what I mean!

Still, there are bargains to be had out there ... thousands (perhaps millions) of old wristwatches lying in jewelry boxes or dresser drawers. And eventually, many of these do find their way to garage and church sales, St. Vinnies or Goodwills, and estate sales. Another advantage of these sources is that the watches are often in what I like to call "unmolested state." They have not passed through half a dozen collectors and/or dealers and are less likely to have been "molested" with bad repair jobs, wrong or inappropriate replacement parts, and the like.

And, in this particular case, an online charity auction. I don't frequent this site myself, but a good friend and customer from the Atlanta area sent me an email the other day with a link to a charity auction and said I should check it out. I found this images to go with the auction: 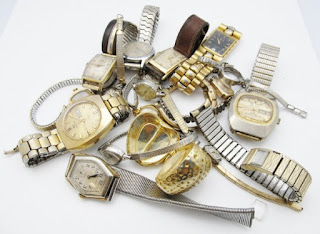 A poor, fuzzy picture to be sure, and just as bad the lot was poorly labeled "Vintage Watch Lot for Parts, Repair." But the image was good enough that I recognized an Illinois Ritz in the bottom left portion. And also what looked to be a vintage Hamilton in the upper middle. I submitted a proxy bid at the last minute of the auction for $256.53, and I got the lot for $102.51.

In about 10 days, I received the lot. To my delight, it contained the Ritz, and the Hamilton happened to be the 1935 "Boone" with reeded edge. 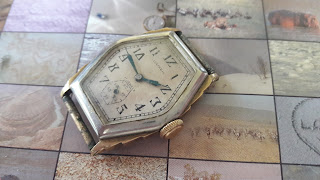 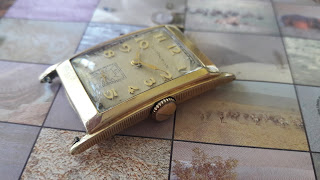 There was also a salable vintage Waltham rectangle in there, and the rest was basically junk, stuff I put in 20 pound boxes and sell to crafters, steampunkers, and so forth. The Boone will clean up nicely and should sell for around $250. The Ritz is a bit iffy. The Ritz has fallen dramatically in value over the last 10 years or so. I can remember seeing them for sale for as much as $1,250. It is supposedly the second most desirable Illinois model after the Piccadilly. One sold on eBay last December for $850.  I already have a Ritz that I've offered as low as $650 with no takers. But very probably I could move this one along "as-is" in the $500 area. So that's a $647 profit on a $103 investment. Not bad for a day's work.

But unfortunately, these kinds of deals don't come along every day, or every week, or every month. At best they come along once or twice a year. But I'll take 'em! Because the occasional home runs like this help make up for all the crappy deals I get into frequently where I barely break even or lose money.

So don't completely discount these kinds of "bottom-of-the-barrel" resources. There is indeed the occasional pony in the pile of manure, as the old joke goes. If you haven't got the time to dig yourself, enlist the help of friends or pickers. And be sure to reward them when they come up with the occasional pony!